“ARK: Survival Evolved is a different game to everyone who plays it. Some play it to build entire villages surrounded by metal walls. Others play it for the survival aspect, which requires you to eat and drink every few minutes.

But if you’re like me, then your favorite part of ARK is taming creatures and breeding them. There are 177 creatures in ARK: Survival Evolved. Some creatures are there to harass you without the prospect of being tamed. Others are there to utilize but not fight, such as shoulder mounts.

One interesting creature that many regular ARK players have at their base is the Megatherium. The Megatherium is one of the most useful creatures in ARK, and here’s why. Before we go on into our Megatherium Ark Guide, let’s see what Megatherium actually is.

What Is A Megatherium?

A Megatherium is a large, sloth-like creature. Helena Walker describes it as a giant sloth, if you crossbred it with an elephant and a bear, in her journal. You can spot them prowling around forests and snowy mountains.

The Megatherium is a gentle creature that only acts out whenever it is provoked or enraged. The hooked claws and long tongue may give it away from afar, but even if you don’t notice the details, you will notice its large frame.

The Megatherium is one of the largest mammals in ARK, making it a great tank and pack-mule. But this also makes it more intimidating than something like a Castoroides.

What To Know Before You Encounter A Megatherium

Before you encounter your first Megatherium, if you happen to stumble upon this Megatherium ARK guide before prancing into the Redwood, you need to know a few things about how they react to surviving humans. As long as you leave it alone and it doesn’t attack any bugs, then you’re fine. But if you attack it or it attacks insects near you, then you better be prepared to run.

What Does The Megatherium Do?

The Megatherium can do a lot of the generic stuff that any other larger dino can do. It is great at fighting and is one of the tankiest creatures in its weight class. But it is known for one special ability.

After it kills an insect, the Megatherium goes into Insect Killer mode. The Megatherium will do 250% to any target for 120 seconds and will do 375% damage to insects while under the effect of the buff.

Where Megatheriums Can Be Found

The Megatherium can be found in the Redwood Forest biome and the Tundras. The exact spawn region for each map is different. Take a look at where to find the Megatherium on each map.

On The Island, Megatherium spawn in the snowy mountains. They are most common in Whitesky Peak, Frozen Fang, and Winter’s Mouth. Although rather rare, they also spawn throughout the Redwood Forest.

On The Center, Megatherium spawn in the snowy mountains, especially around the bottom. However, they can also occasionally be found in the Redwood Biome. Check the area closer to your base to make transporting it back easier.

On Scorched Earth, Megatheriums can spawn almost anywhere. They can be more difficult to find because they don’t have a congested home. Try searching for them in the Central High and the Western High Desert.

On Ragnarok, Megatheriums can be found on the northeast snow mountains. But if you don’t have fur yet, then consider searching for them in the Redwood and Fifer Plateaus.

On Extinction, Megatheriums spawn in the Snow Dome. However, they can also be found occasionally in Sanctuary. If you like to stay safe, then stay towards the center. Otherwise, venture out to the Snow Dome.

Megatheriums are usually easy to find in Valguero. I have had the most luck finding them in the Tundra, where the Redwood meets the snowy mountains. But they also spawn directly in the Redwoods.

On Genesis: Part 1, Megatheriums only spawn in the snowy biome. However, they can spawn anywhere to the left of Spire Rock, with very few Megatheriums making their way to the right side.

On Crystal Isles, Megahteriums have many spawn points. Their largest spawn point is in The Great Forest while their most common is around Tundrafalls. But chances are, you’ll run onto one without trying.

On Genesis: Part 2, Megatheriums spawn exclusively in the lower right quadrant. Soot Peak is a common spawn point that is easy to search, but they can be found almost anywhere in the area.

On the newest ARK map, Lost Island, Megatheriums spawn in the northern desert as well as anywhere on the snowy mountains. They also, rarely, spawn the region directly south of the snow mountains.

How To Tame A Megatherium

Taming a Megatherium is not easy. But if you are patient and geared up, then you can have it done in an afternoon. These are the basic steps you can take to tame your first Megatherium.

While you can use your own DIY method for taming a Megatherium, what I have found is the cheapest is building a pen with pillars. If you can afford a gate with a door to close, that is even better.

Make sure that the pillars are far enough apart that you can easily walk through them but not so far apart that the Megatherium can slip through. If you’re lucky, the Megatherium will get stuck on a rock or a tree, making building the pen unnecessary. 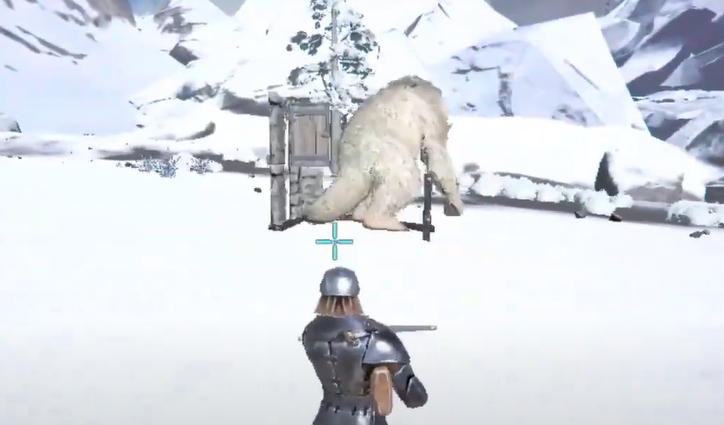 Once your trap is set, you need to lure the Megatherium. To do this, wait for it to be enraged or attack it and run through the pen. If you have a gate, close the door behind it. If you don’t, place something in the entrance or keep aggro. The latter is risky but free.

Again, if you find the Megatherium in the Redwood forest, you can trap it easily between trees. This is more difficult to do if you’re in the mountains or have led it to the plains. But it’s worth a try to save yourself from building a trap.

For a max level Megatherium, you will need around 100 to 120 tranq arrows. For a level 30, you may only need 30 tranq arrows. It also matters if you’re using a bow or a crossbow. For a crossbow, you can cut that number of arrows you need in half.

If you use tranq darts, then you won’t need more than 30. Keep in mind that your server settings matter. Some servers have double taming rates while others have the rates lowered. Check with a mod if you’re not sure what yours are set at.

After the Megatherium has been knocked out, it’s time to feed it. The best way to tame it is to feed it Superior Kibble. You won’t need more than 20 of these. Raw Mutton and Giant Bee Honey are also great choices. Other meats and berries are possible, but they may not be worth it.

For example, if all you have on hand is raw fish meat, then you will need over 2400 narco berries and love 300 meat to keep a max level Megatherium down. Stick with Kibble, Mutton, or Honey if you want to optimize your time.

If you tame a Megatherium, it will pay off quickly. Megatheriums are great fighters that have special abilities surrounding insects. Here’s where you will find the most profitable.

Let’s start with the basics. Megatheriums are strong against insects. When they kill insects, they gain a huge buff that multiplies their damage output. But even without the buff, they do 150% to bugs.

Because they are strong against insects, Megatheriums can prove useful in large caves. They can get their boost from Arthropluera, Scorpions, Spiders, Dung Beetles, and more.

They aren’t recommended for small caves simply because they won’t fit through passageways. But if you have a Cryopod, it may be worth taking one with you in the medium-sized caves.

On some maps, there are places where spiders spawn in great numbers. One of these places is The Lair on Valguero. In these instances, a Megatherium is the number one approach to take at the entrance.

Just be careful not to venture to this one in particular without donning your gas mask as there is poisonous gas inside.

The Broodmother boss is one of the four main ARK bosses. Whenever you face her, having a team of Megatheriums by your side can cut your losses and give you a better chance of defeating her.

I’ve found this is a good thing to do with the male Megatheriums that have been replaced by a better one at home. You can take them without losing too much if they die during the journey.

While Megahteriums can gather berries, fiber, and cactus sap quite nicely, it is best at gathering chitin. The damage buff that the Megatherium gets increases the amount of chitin it gets normally, which is already a lot.

You can gather hundreds of chitin from small bugs like trilobites or ants with an enraged Megatherium. So if you have a Megatherium, never try to gather chitin with hand tools again.

How Do You Use A Megatherium?

The Megatherium has three abilities: Claw, Bite, and Slam. Claw and Bite do the same amount of damage at 32 base damage, while Slam does significantly more with a base of 49 damage.

Once you’ve tamed a Megatherium, you can put it in a Cryopod or ride it home. The Megatherium can only be carried by Wyverns, Quetzals, and Tusoteuthis.

Since you won’t use a Tuso to fly home, your best bet is to either build a saddle before you leave home or take a large flyer with you.

The process of breeding Megatheriums is just like breeding any other mammal on ARK. Place them together, make sure they have food, and turn Mating on. The breeding rates are similar to other dinos of its size.

When breeding Megatheriums, you’ll have to wait for a day or two between breeding cycles with females. The male can breed as often as you like but females have to wait. That’s why I recommend keeping one male to breed multiple females for exponential family growth.

Question: What Does A Tamed Megatherium Eat?

Answer: Megatheriums are omnivores. They tame with kibble, honey, meat, or berries. When tamed, they will eat almost anything, making it one of the least picky eaters in ARK.

Answer: According to the Natural History Museum, Megatheriums did exist. They lived from the Middle Pleistocene period to the Holocene period and are closely related to modern-day sloths.

Question: Are Megatheriums Immune To Radiation?

Answer: No. While they are good in caves due to their superpower, they are not immune to radiation. If they have high health, they can survive for a while, but the radiation will eventually kill them.

Question: What Is An R-Megatherium?

Answer: An R-Megatherium is a Megatherium that can only be found in Genesis: Part 2 and newer maps. R-creatures do five percent more damage but have 3 percent less health. They can also avoid the level cap set on the server.

Question: Can You Use Weapons While Riding A Megatherium?

Answer: Yes. You can wield weapons and tools while riding the Megatherium. This makes taming and fighting other creatures much easier once you have a Megatherium.