There are nearly 200 dinos in Ark: Survival Evolved. It seems impossible to learn everything there is to know about them all, but my goal is to do so. Since I have over 1000 hours in Ark, I believe I know a good majority of what’s vital regarding these dinos.

The Quetzal is technically called the Quetzalcoatlus, but 99% of Ark: Survival Evolved players know it as the Quetzal. Some even call it a Quetz.

The bird-like creature should not be confused with the real-life Quetzal bird found in Guatemala or the coin of the same name.

This Quetzal is much larger than the Guatemalan bird and is believed to have gone extinct sometime during or directly after the Maastrichtian era.

The bird is still kicking in Ark, and it has become one of my favorite flyers. While it isn’t as fast as a Griffin or as tanky as strong as a Wyvern, it’s still a good choice with many unique benefits.

Before we go on with our complete Quetzal Ark guide, let’s see what Quetzal exactly is.

What is a Quetzal in Ark?

The Quetzal is a unique creature in Ark: Survival Evolved. It isn’t the best attacker, with a weak base attack damage. However, it is a beautiful flyer that can carry your materials and an entire base atop its saddle.

What to Know Before You Meet a Quetzal 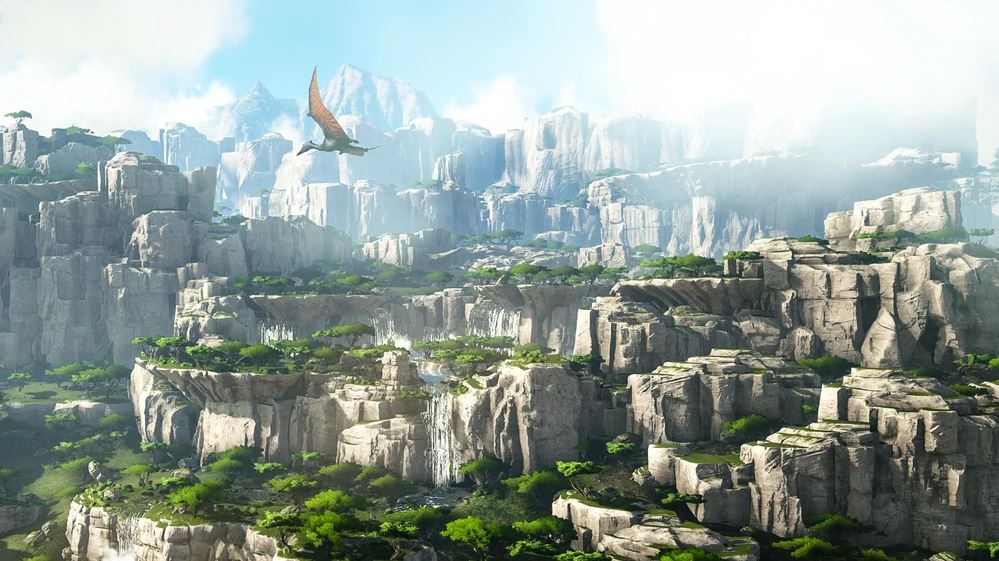 The Quetzal is a “Skittish” creature just like the Pteranadon. This means that the Quetzal will be unpredictable when you attack it but won’t attack you back. You don’t have to worry about facing off against a wild Quetzal. However, a tamed one, owned by a rival tribe, is something to be afraid of.

If you’re not careful, the turrets on its back and the ability to pick you up will be your demise. Thankfully, you can tame your own Quetzal to face off against your rivals. The hardest part is finding one of these elusive creatures.

Where to Find Quetzals on Ark Maps 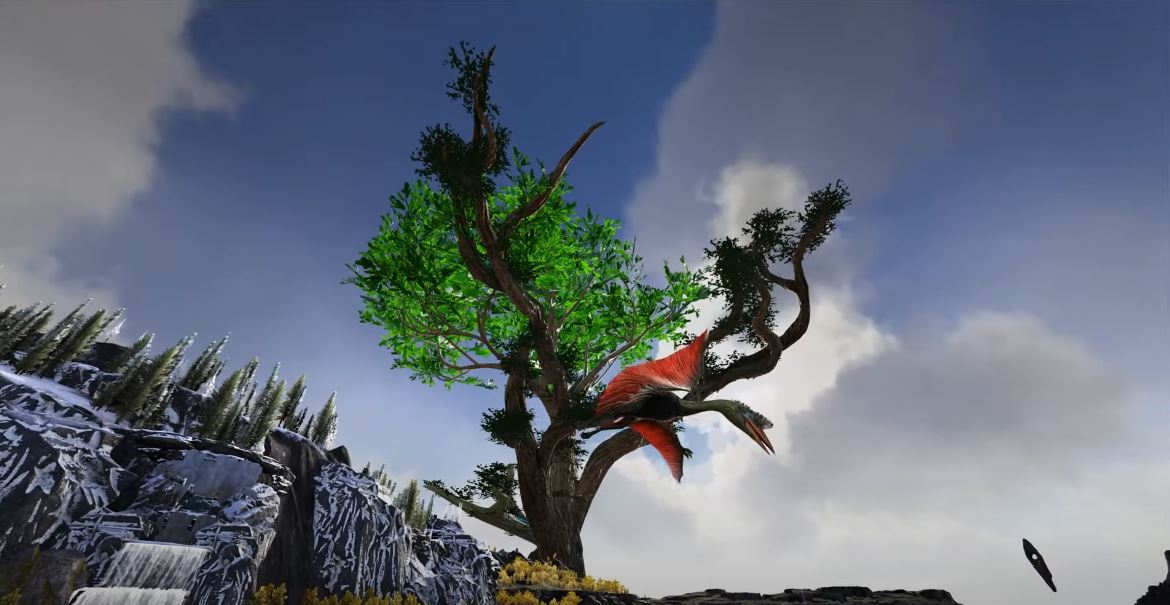 Quetzals didn’t initially spawn on the first three maps, but now they do spawn on every map aside from Aberration and Genesis: Part 1. The Quetzal is rare on every map, so you won’t find any area where they spawn in great numbers. If you don’t find one in the spawn area, it may be best to wait a day and try again because there aren’t always Quetzals on the map on any given day.

The Quetzal can spawn anywhere on The Island. Since The Island’s biome diversity is not great, the Quetzal doesn’t have a specific spawn point. This is good if you explore a lot but not great if you want to go search for a Quetzal.

Quetzals on The Center can spawn anywhere in the northern regions. They do not spawn in the south, but you may find them flying anywhere else. This doesn’t make it easy to find them, but it lets you know where not to look.

I haven’t found a reliable spawn point for Quetzals on Ragnarok, but I have found them most often directly north of the snow mountains. There have also been a few spotted on Glacier Hill.

This is where Quetzals came from. On Extinction, Quetzals spawn in the western region of the map. You may find a few that have strayed to the eastern region, but I never have, and I don’t believe those spawns are organic.

On the Crystal Isles, the spawn points for Quetzals are more predictable. You may find them in the Great Forest, the Great Valley, above the Fire Swamp, and in the northern desert.

The Quetzals on Genesis: Part 2 spawn in the two eastern regions and cannot be found organically in the western region. If you have visited Genesis: Part 2, you will notice that the two areas are incredibly different, and so are the dinos that spawn there.

On Lost Island, the Quetzals can spawn anywhere aside from the desert. I’ve often seen them around the mountaintops as they tend to fly high whenever possible. These may be the most efficient ones to tame.

How to Tame A Quetzal

It is not easy to tame a Quetzal under normal circumstances. That’s why there are so many variants that people have invented to help other players tame a Quetzal. While there are at least a dozen techniques out there, I will only share my favorite, most efficient strategies. 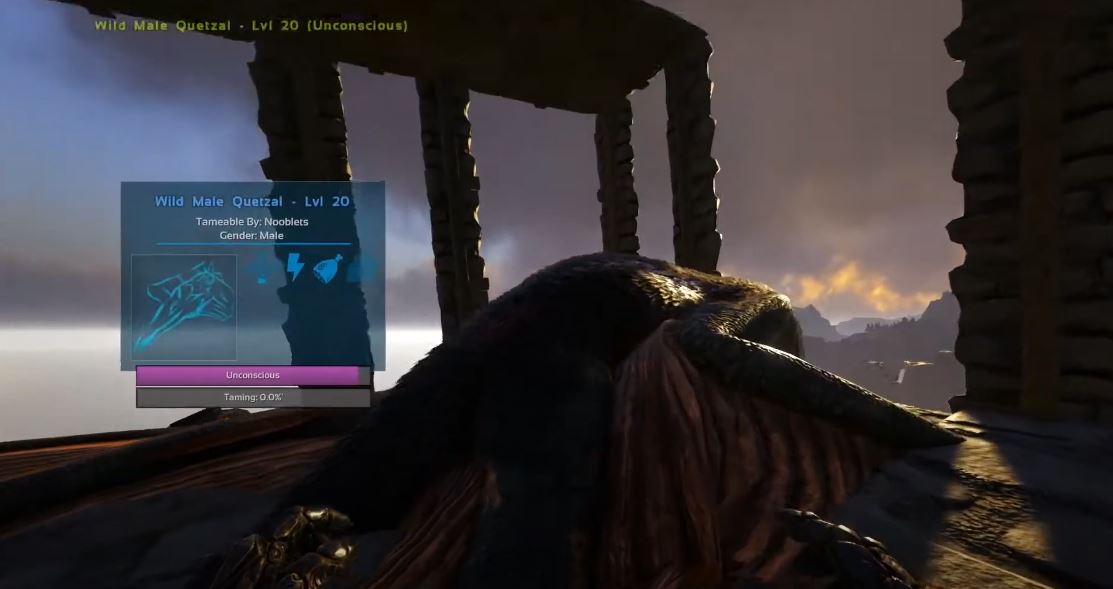 What’s the best dino to help you tame a Quetzal? Another Quetzal, of course. Now, while this is a good option, it’s not viable most of the time because you may not have a Quetzal yet. But if you do, you can easily tame the Quetzal by building a cage on the tamed Quetzal.

Then, you can trap the Quetzal in the cage. Once it is captured, knock it out. Do not move the tamed Quetzal, or the wild one will glitch out of the cage whenever it is knocked out.

This is my favorite early game strategy. Since the Quetzal is a passive creature that will not attack you, you can use the Crystal Wyvern method to tame the Quetzal. All you have to do is grapple it, and it will take you on its journey.

Then you can shoot it until it passes out. Make sure you have a parachute on your hotbar and another flyer following you so you can hop on the other flyer if the Quetzal wakes up again.

This is my favorite method for almost anything. The Griffin is the best dino for taming or killing, in my opinion. For the Quetzal, you can shoot while driving the Griffin, just as if you were riding a horse that can fly. There isn’t much to this weapon. All you have to do is shoot and fly, shoot and fly. 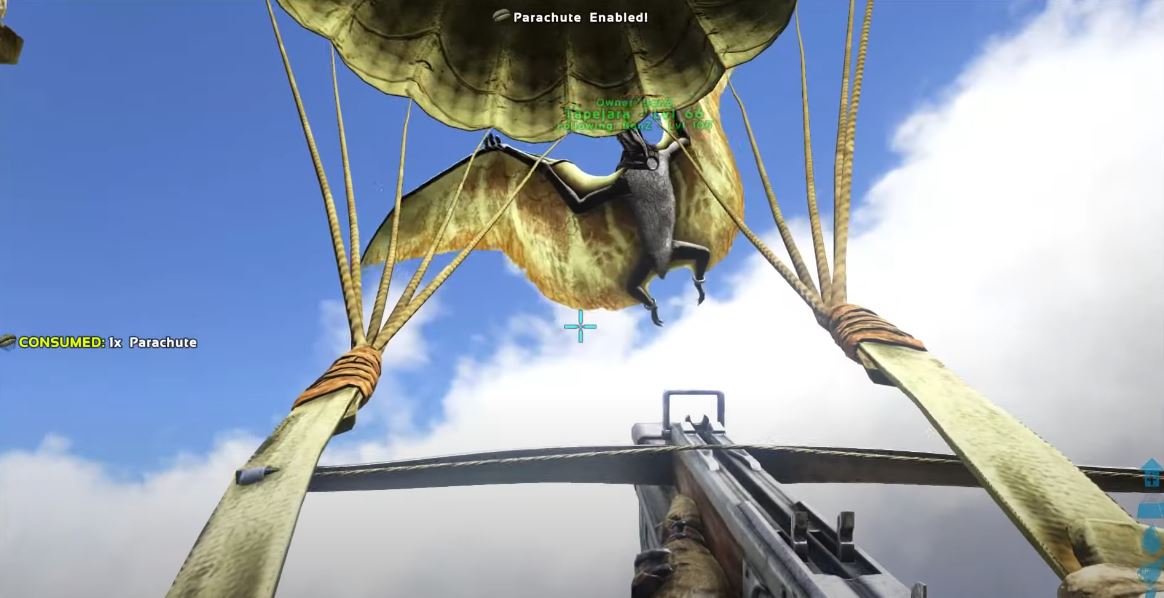 This takes a long time, but if you have a lot of hide and not many dinos, you can build some parachutes and try it out. Fly way above the Quetzal and then parachute down, ensuring your dino is following you. Shoot the Quetzal as you fall, and when you land, go ahead and do it again.

Not Tested by Me: Rare Flower Technique

I have not tried this, but I have been told it works. I was also told as a kid that Link could teal Ganon’s white horse in Ocarina of Time, which turned out to be a lie. The rare flower technique in Ark involves eating Rare Flowers, which is said to make Quetzals chase you right into a trap you set. This may work, but I cannot confirm it.

This is another technique that sounds more realistic, but I have not tried it. It is said that Quetzals always fly to the coordinates 50-50 when they flee. Whether this is only on some maps or all of them is unknown. The point is that you know where they are going, and once they are there, they will fly in circles, allowing you to shoot them easily. 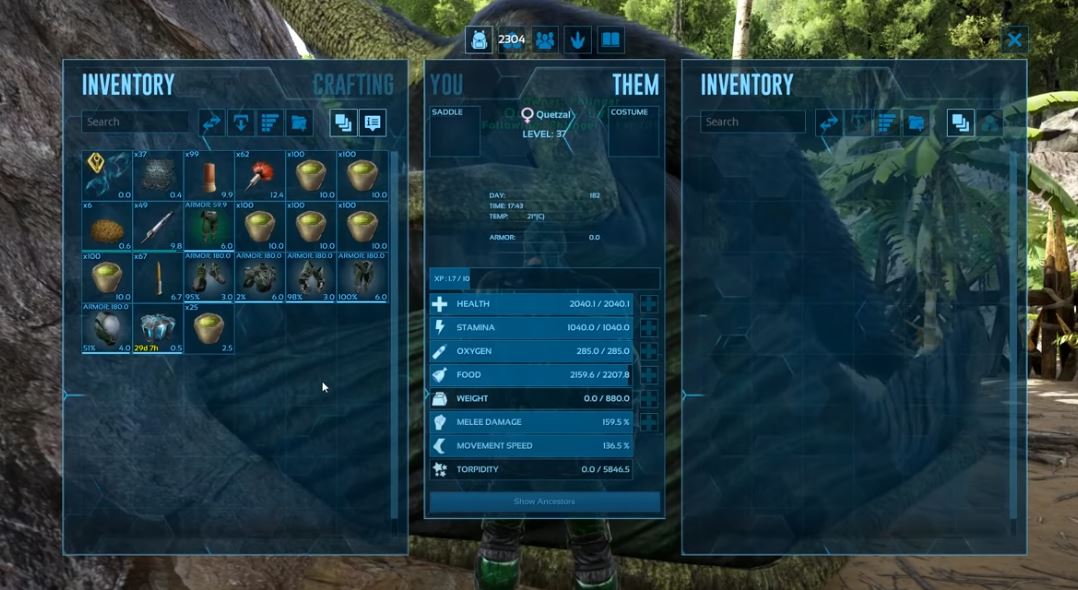 The Quetzal is a useful dino with features unlike any other. After you tame one, your life on Ark will change for the better. If you dream of never worrying about carry weight or transporting your base, you never have to worry again.

Battling with a Quetzal

Due to their size and decent stats, the Quetzal makes a good flying fighter. Not only is it unlikely you’ll get knocked off of the Quetzal, but it can also host turrets. However, I do not recommend using the Quetzal attacks to take down enemies.

It isn’t a strong mount in that way, but it can work as a highly mobile platform, allowing you to get the greatest angle to attack with turrets.

Out of all of the standard flyers, the Quetzal has the highest base carry weight, which is twice as high as a Wyvern. It can carry a lot of materials and gear across the entire map. It also has the single highest stamina of any flyer. Since it also has good stamina, it won’t get tired very often. I love using the Quetzal to help out tribemates move their base.

Quetzal Platform Saddle – The Flying Base

This is my favorite thing about Quetzals. Their platform saddle allows you to build a small base on top. This may be the safest place to build a base that definitely won’t be taken.

Although it’s not usually my main base, it is definitely always one of my bases, equipped with anything I could need.

Because of the platform saddle, the Quetzal can do a fantastic job of helping you tame other creatures. You can use turrets on the Quetzal to take down the strongest dinos and those that can only be taken down with such weapons, like the Titanosaur.

On top of that, the Quetzal can move most dinos by picking them up and dropping them into a pen, making it way easier to tame them.

You can breed Quetzals just like you can any other dino in Ark. There isn’t much to it. All you have to do is put the two Quetzal near each other and turn breeding on. The creatures are not mammals, and therefore, they lay eggs.

I couldn’t wrap this up without mentioning one of the coolest dinos in Ark. The Tek Quetzal is a special variant that was added in Extinction. It is 20% stronger than its vanilla counterpart and has a 5% chance of spawning when capable of spawning on the map. The spawn points are the same, and it is possible to find them on any map where there are regular Quetzals.

Question: Will A Wild Quetzal Ever Attack You?

Answer: In my experience, no. The Quetzal is a skittish creature and prefers to run away just like the Pteranadon, which they are similar to. If a Quetzal attacks you, it may be a problem with the server settings.

Answer: Quetzals are very rare. They do not spawn in packs, and sometimes, there aren’t any Quetzals on the map at all. That doesn’t mean they will never spawn, but you can’t be certain there are any on the map.

Question: What Dinos Can A Quetzal Pick Up?

Answer: A Quetzal can pick up a Rex and anything smaller than a Rex. This sounds impossible, but that just means it’s even more fun to try it out. It looks insane too, but it is very possible.

Getting Your First Quetzal

It doesn’t matter how long it takes you; you have achieved something great if you get a Quetzal. This is one of the most difficult to tame creatures in Ark. Not because they are aggressive; they are not. The Quetzal does not often spawn, so you’ve found a gem when you do find one.

Most players will never tame a Quetzal. I myself have only tamed a Quetzal twice, and it was not easy. They tend to fly high, and when you find one, you usually have to settle, even if it’s a low level. But it is worth it every time because once you get that platform saddle, a new element is added to the game I love.