Arron Kluz
Arron is a featured team writer and lifelong gamer. Ever since he started playing games on his old SNES, and has been hooked ever since. He has a particular love for games like Pillars of Eternity, Skyrim, a variety of beloved indie titles, and also a few online shooters to serve as a means of avoiding open-world fatigue. Outside of gaming, he enjoys watching arthouse movies, playing Dungeons & Dragons, and writing fiction.

Don’t Starve is a highly challenging survival game and its playthroughs hinge on the characters that players choose to use. Every character has their background, personality, and special abilities that vastly change how players have to approach the dangerous world of Don’t Starve.

So, if you want to get past the first handful of days in the terrible wilds of the Constant, it is imperative to know everything you can about your character of choice. Luckily, you’ve come to the right Wagstaff Don’t Starve guide if you want to use the scientist Wagstaff. 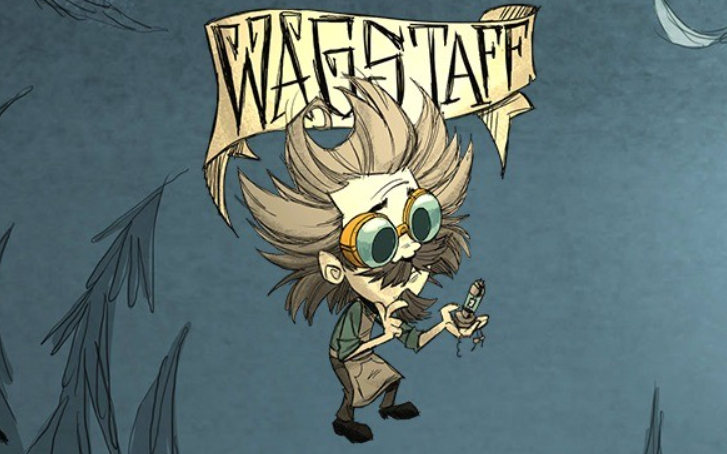 Wagstaff is a scientifically-minded individual who seems to have played a role in the arrival of numerous other characters in the Constant. His story begins with his invention of the Voxola PR-76 radio, which revolutionized the world when it was released in 1919. However, few were ultimately released, as the company’s only production factory burned in a fire just a few days after it started operation. That same night Wagstaff went missing and was never seen again, causing the company to go bankrupt and close its doors for good not long after.

However, specific dialogue from Wagstaff seems to imply that he is not trapped in the Constant like most of the other characters, but rather that he wants to be there to discover what secrets and oddities it holds. This could mean that the production of the PR-76 radio was a step in Wagstaff’s journey to the Constant, which would explain why it can be seen as part of the Divining Rod and the Gramaphone.

Wagstaff has also been implied to have connections to numerous other characters in Don’t Starve and Don’t Starve Together. It was revealed that Winona worked at Wagstaff’s factory leading up to her disappearance. At the same time, it has also been confirmed that the factory played a role in Charlie’s arrival in the Constant. It is also implied that Wagstaff knows WX-78, and it is feasible that he could be the robot’s original creator. 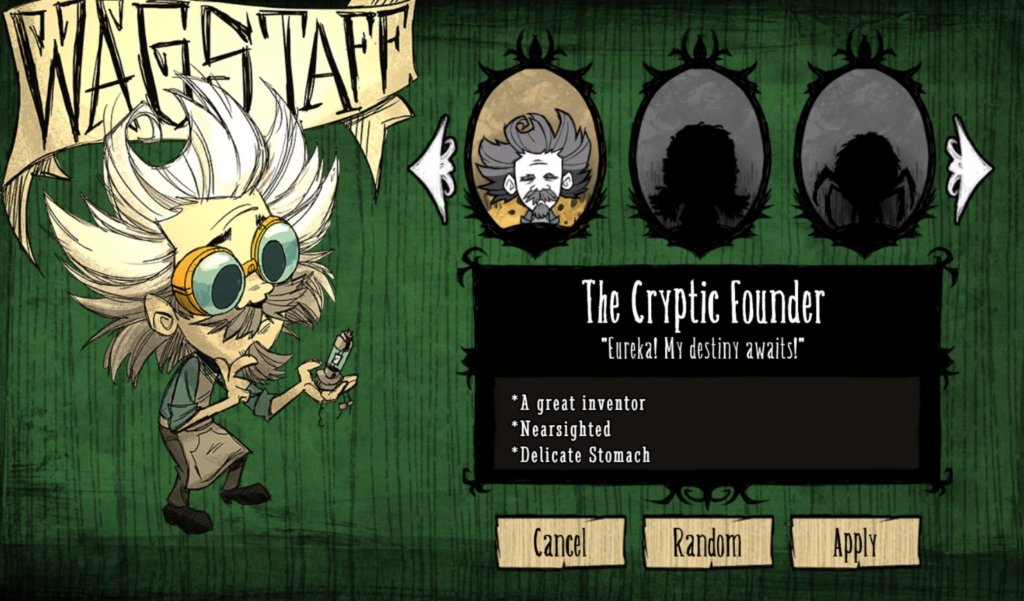 Wagstaff has yet to be added to the multiplayer. Don’t Starve Together if he ever will be. Still, Wagstaff offers a unique approach to surviving the Constant for players who like surviving alone. One of the most significant parts of playing Wagstaff is his special Tinkering crafting tab.

Within it, he can craft goggles that fix his nearsightedness and have other benefits and three character-exclusive gadgets that allow him to travel across the map faster than any other character. The contents of the Tinkering Tab are below.

Wagstaff is also helped by his considerable Hunger value of 225. His high capacity means that he can survive for three whole days without eating if he has a full stomach, which is incredible. However, he also has a sensitive stomach, making him take three damage anytime he consumes raw or dried Food. As mentioned in the above table, Wagstaff is also nearsighted.

This means that if the player is ever without a pair of goggles, the world becomes very blurry, making it incredibly difficult to play him. It also makes objects appear with a random name rather than what they truly are. This is difficult enough on its own, but it also makes it more difficult for Wagstaff players to survive combat and during Winter, as the goggles constantly take up his head slot.

Interestingly, the code for Don’t Starve Wagstaff labels him as a projection. What this means is unclear, but it could mean that Wagstaff is not physically in the Constant like other survivors, which may explain his unusually high Hunger points. It also may coincide with how Wagstaff changes when he takes damage, both visually and audibly. Whenever he is hit or has lower Health, his voice continually gets more distorted while his body also changes over time. 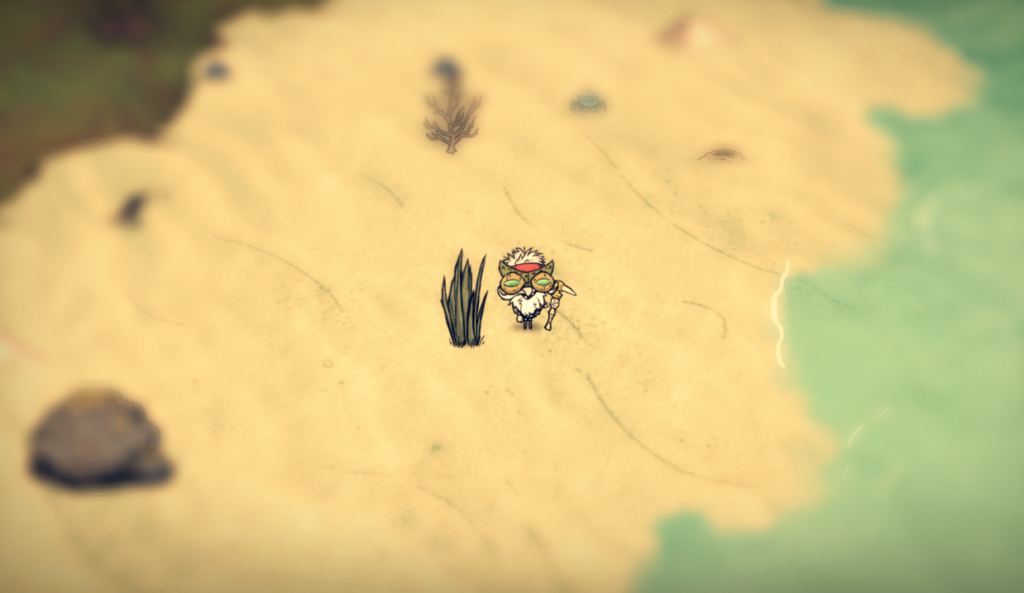 When starting a game as Wagstaff, it is best to set up your base near a Pig King. However, remember not to establish yourself too close since the Pigs will turn into Werepigs on a full moon. But, being close enough will allow you to kill Pigs and give meat to the Pig King in exchange for Gold, both of which are necessary to craft new Spectoggles. In the early days of your playthrough, you can also take your time in getting food and prioritize other things, like getting a Science Machine, since you have three days until you need to eat.

Once you’ve established your camp, you’ll want to get your hands on one of Wagstaff’s unique goggles to use them accordingly. You should use Spectoggles whenever you need to find Peculiar Objects, as they mark them and allow you to identify them without using a magnifying glass or go to swamps, as they’ll let you see Tentacles so you can avoid them.

Infroggles should be used rather than a regular light source when going into caves or to keep nightmare hands away from your fire on light, as turning them one for just a second will chase them away. The Visor should be your de factor combat armor. The limited visibility will likely make it so that you don’t want to keep them on outside of combat, but it shouldn’t get in the way of your kiting, which makes them effective.

They are also relatively cheap to craft, so don’t be afraid to make two or three if you’re preparing for a tough fight. Finally, the Fryfocals should be used frequently but with care. Shooting fireballs from them can be scary, as burning your entire base and world down on accident is a constant fear in Don’t Starve, but they can only be used to attack if you have nothing in your hand.

So, you can hold off on using fireballs until you know you want to and keep a tool in your hand to prevent any accidental uses. The Fryfocals are also a good candidate for your constant wear option as they don’t lose any durability except by firing fireballs, unlike the Spectoggles that constantly degrade as they are worn.

The Telebrella and Telipad combo are also particularly powerful as a fast travel system and a way to escape hairy situations you aren’t prepared for. There are a few different ways to approach using the items you should consider. The first is setting up multiple Telipads around the map with smaller bases by each that you know safe zones.

This will ensure that you never are out of range of a Telipad and can use the Telebrella anytime you run out of resources, run into an enemy you weren’t expecting, or have some bad luck. The second approach is having two Telipads that you can use for extremely fast travel across the map.

If you stand on one Telipad and use the Telebrella, it will send you to another Telipad, allowing you to travel incredible distances instantly. This can be very useful for traveling from your main base to a resource-heavy area or traveling across islands without using a boat every time.

The Thumper gadget will be your best friend when harvesting Wood. Once you get one built, you’ll never build another Axe, as it is the best Wood farming tool currently in the game. Once you get a Thumper, you’ll want to place it a safe distance away from your base so that it doesn’t destroy any of your structures. Then, all you need to do is plant trees around it with pinecones up to five deep in each cardinal direction.

Wait for the trees to grow fully, and then activate the Thumper. This will then harvest all of the trees and their stumps, netting you up to hundreds of Wood with just one use in a second. The Thumper can also be an effective tool for killing neutral mobs like Beefalo, Moslings, or Royal Guards. Since the Mobs will only become angry at the Thumper and not Wagstaff, it can help players avoid combat in these situations by putting it down, luring the Mobs over to it, and activating it. 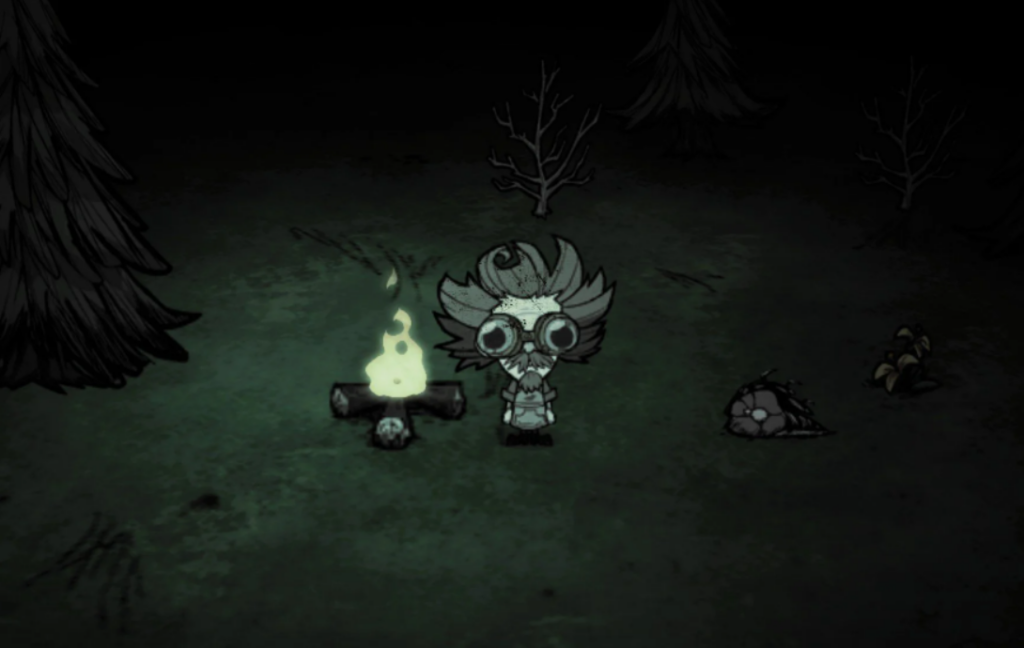 “An exemplary application for bioluminescence.” – When inspecting a Boat Lantern.

“An epiphany in transporting technology.” – When inspecting a Piggyback

“A crystal diode made of gold and rocks! I have many uses for this!” – When inspecting an Electrical Doodad

“Is it made of asbestos?” – When inspecting Scalemail

“Has considerably more weight when it is worn.” – When inspecting Limestone Suit

Question: Why do many character names start with “W” in Don’t Starve?

Answer: The developers at Klei have clarified that it was originally an accident, but they then decided to roll with it because they thought it was fun.

Question: Why was Warbucks removed from Don’t Starve?

Answer: The developers have explained that they felt Warbucks was culturally-insensitive and that he did not have enjoyable enough mechanics to justify reworking his appearance and personality. They have said the mechanics may come back to the game in some form with a different character, but it doesn’t seem like Warbucks will return.

Answer: Don’t Starve is particularly hard for newcomers, but once you get its basic mechanics down and understand what is expected of you, it becomes much easier to survive a long time in the Constant. Then, you can challenge yourself by learning new characters or trying to take on the game’s cast of bosses.

Wagstaff was a welcome inclusion to Don’t Starve when he was added, and he has remained a fun mix of unique mechanics and skills for players to adapt to. Unfortunately, it does seem unlikely that Wagstaff will be added to Don’t Starve Together, at least not without significant reworks, as he currently would invalidate other characters focused on resource gathering while also being able to use his Thumper as a frighteningly effective griefing tool.

However, he is a great option for single Don’t Starve players, especially since he can be played without having to unlock him. Wagstaff’s position within the world and lore of Don’t Starve is also exciting, and it will be very cool to see how else he may tie in with future characters that Klei releases for the games.