In ARK: Survival Evolved, utility creatures are just as valuable as combat creatures. The Doedicurus is one of those creatures you may want to tame right away, as the utility offered by this stone-gatherer is top-notch.

Other creatures like the Ankylosaurus and the Castoroides are crucial members of the gathering team, but no team is complete without the Doedicurus. The Doedicurus is the only creature you’ll ever need to gather stone. 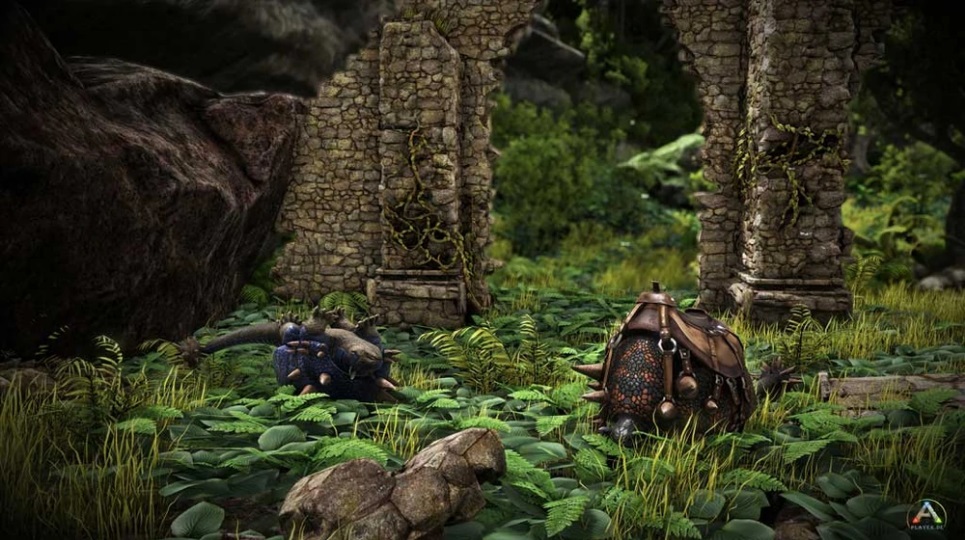 Although it has other uses, its ability to gather stone efficiently is why players prefer to keep it around. So, put away that pickaxe and tame one of these guys, and you’ll have an endless supply of stone at your fingertips. Before we go on with our full Doedicurus ARK guide, let

What is a Doedicurus in ARK?

The Doedicurus is an armadillo-inspired creature in ARK. It is ARK’s best stone gatherer and is decent at gathering a few other things. However, other than for gathering stone, you probably won’t use the Doedicurus for anything else if you have a better option. That said, it’s so good at what it does that you will likely tame one as soon as you find one.

In real life, the Doedicurus was a glyptodont who belonged to the same family as sloths and anteaters. It is closely related to modern-day armadillos. The Doedicurus in ARK is nearly identical to what we believe the real Doedicurus looked like. While you may believe that the Doedicurus is a reptile, it is a mammal, just like the other creatures like it.

What to Know Before Your First Doedicurus Encounter?

The Doedicurus will never attack you unless it feels threatened. When it does feel threatened, it has one of two reactions. At first, it will swipe its spiked tail at you in an attempt to defeat you. Don’t worry; this attack is easy to dodge as the Doedicurus is unable to sprint, and it charges the tail swipe for a moment before swinging.

However, when the Doedicurus’ health or torpor reaches a certain percentage, the Doedicurus will curl up into a ball, significantly reducing incoming damage. This makes it zero percent threatening, but it does make it more difficult to kill.

If you’re not farming the Doedicurus for hide, keratin, and raw meat – or taming it – then you can ignore this creature. Because it is docile, it will go about its life without paying you any attention.

Where to Find Doedicurus in ARK: Survival Evolved Maps

Doedicurus tend to gravitate towards the grasslands and mountains. They can also wander into the swamp and redwood, depending on the map. So they are one of the few creatures that can survive – and even thrive – in any biome except Aberration.

The Doedicurus spawn most often in the areas surrounding Grand Hills, Frozen Tooth, and Far’s Peak. However, you can also find them in the Redwood Forest and scattered about the grasslands on The Island.

The best place to find Doedicurus on The Center is in The Center (The Floating Island) and the Redwood Biome. You won’t have much luck finding them anywhere else; however, they can spawn in the southern jungles.

The only place you’ll find that is densely populated by Doedicurus is south of the Central Mountains. Otherwise, Doedicurus spawn all over the map, with the mountains to the far west the only exception.

The Forbidden Valley on Ragnarok is littered with Doedicurus. However, you may also find luck in any of the grassy areas on the amp, especially those near the mountains, but not in the mountains.

Even though Doedicurus can spawn in the western Sanctuary, it’s not worth taking a special trip for. Instead, stick to the desert biome on this map alone. This isn’t the standard biome for these creatures, but it’s where they are found on Extinction.

Valguero has Doedicurus everywhere aside from the snowy mountains and the northern redwood. However, if you’re making a trip to look for Doedicurus, the only place I recommend is the White Cliffs.

There are two regions on Genesis Part: 1 where you can find Doedicurus. The Volcano biome is your best bet, but if you don’t want to brave it, you can check the East Arctic. They can spawn anywhere in the snowy region but prefer the east to the west.

You may find Doedicurus in Isolation Peak, but I prefer to visit and even around S.U.M.P., but I prefer the vastness of the southeast as they can spawn almost anywhere in this quadrant.

If you’re looking for Doedicurus on the Crystal Isles, I suggest starting in the Desert Savannah and working your way north. When you reach Central River, redirect to the northwest.

By far, the best place to look for Doedicurus on Lost Island is Zaunaloa. But if you don’t feel comfortable there, you can check out the far east and far west deserts. Alternatively, any of the visible plateaus on the map should spawn Doedicurus. 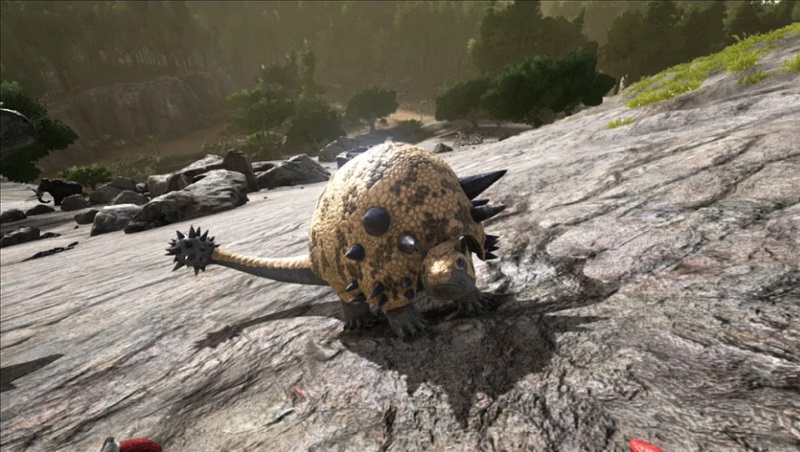 Doedicurus are relatively easy to tame. They aren’t super aggressive, and their attacks are easy to dodge. However, they do have high torpor, and when they go into their shell, it can be difficult to move forward. Other than that, it should be a breeze to tame one.

You can definitely build a trap for a Doedicurus. When you do, you can either lure the dino up steps into a pen with four walls. Or, you can get a Quetzal or Argentavis and use them to pick the Doedicurus up and drop it.

However, the Doedicurus is slow enough that you shouldn’t need to build a trap. Instead, kite it and utilize the time given to you whenever it curls up into a ball.

The Doedicurus is more difficult to knock out than other creatures with the same speed and weight class because it has high torpor and it goes into a defensive state. You will either need a longneck rifle and darts or utilize another creature. You will need around 50 darts or so for a max level Doedicurus, or less if you are a good aim and hit the head every time.

You can also use either a Beelzebufo or Equus to kite the Doedicuurs and save valuable ammo. Both of these creatures do torpor damage. I suggest that if you use ammo, you wait until the Doedicirus isn’t in its shell to attack. When you use a creature, it’s up to you.

If you use Regular Kibble, you probably won’t need to feed the Doedicurus any narc berries or narcotics. However, if you feed it veggies or berries, you should keep at least 1500 Narcoberries or 400 Narcotics on you.

It’s worth it to make Kibble, especially since it’s only Regular Kibble, but if you have a lot of narcotics made, then go ahead and use veggies. As far as berries go, it will take hours to tame a Doedicurus with them.

What Does a Tamed Doedicurus Do?

Like any tamed creature, there are benefits to owning a Doedicurus. While they aren’t the best fighter, they can be taken in caves with few problems as they can roll their way through it like a Roll Rat. But the greatest benefits lie elsewhere. 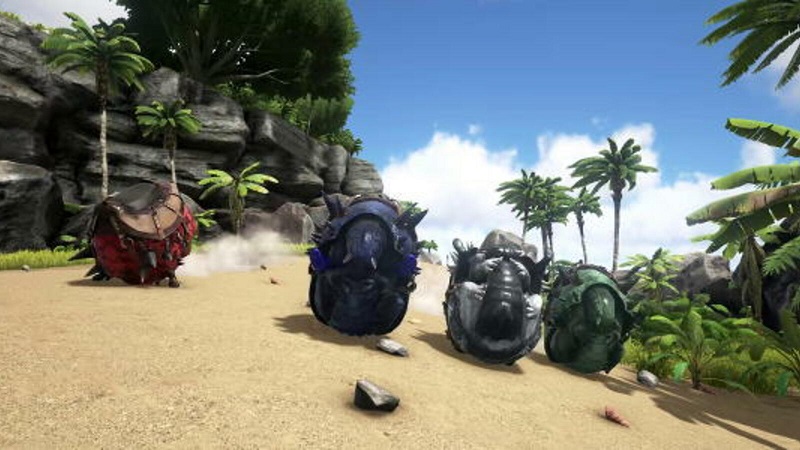 This is the coolest thing that a Doedicurus can do. The Doedicurus can roll right through any terrain and will take almost anything it encounters down with this quick roll. It is fun and extremely quick.

It isn’t easy to control, but if you’re only rolling straight, then it’s efficient. Up until 2020, you couldn’t turn the Doedicurus while rolling, but since the update that year, you are able to turn it, but it isn’t as easy to control as other creatures.

Note: there are actually blue Doedicurus that spawn randomly in the wild. If you find one, tame it as it is a reference to Sonic the Hedgehog. Need we talk about what you shall name it?

Get That Rock – and Sand

The Doedicurus is by far the best stone gatherer in the game. Not only does it gather a ton of stone each hit, but it also has a 75% weight reduction on stone. It can also gather obsidian, but it cannot gather metal. That’s what the Anky is for. If you’re on a Scorched Earth – or beyond – map, then you can gather sand with the Doedicurus better than with anything else.

Since the Doedicurus has a weight reduction on stone, it’s a good idea to set the Doedicurus to wander and pick it up with something like a Quetzal or Argentavis. Then you can gather stone while holding it.

The weight reduction carries over, and you can fly your way to gather and back home. You can get a Doedicurus saddle before you can get a Quetzal or Argentavis saddle, so you probably will have to do things manually for a while. But that’s what ARK is all about – working your way up.

The Doedicurus is a tanky mount. When mounted, it has decent health and natural defense. But whenever it isn’t mounted, it will retreat to its ball form when below 1/3 health. When in this state, it takes 90% reduced damage and torpor. That means it will take around ten times more damage to kill it.

That’s why many players have their Dopedicurs follow them. You can attack while the Doedicurus takes the damage. This even works against turrets as the turret won’t stop attacking when the Doedicurus curls up.

Doedicurus can be bred and raised like most creatures on ARK. All you have to do is put one tamed male, and one tamed female Doedicurus adults next to each other and ensure that mating is on.

Doedicurus are mammals, and thus, they have babies rather than lay eggs. So you don’t have to worry about hatching eggs, the baby pops right out after gestation, and you have to claim it.

Once you claim your baby Doedicurus, you can begin raising it. Make sure that you keep an eye on it, give it plenty of food, and imprint on it when you can. Imprinted dinos are much stronger than those that aren’t imprinted.

Question: Can the Doedicurus Collect Metal?

Answer: No. Doedicurus cannot get metal; they can only get stone from metal rocks. So if you want metal, you can either get a Mantis or an Anky as they are the best metal gatherers.

Question: How Do You Make Kibble for the Doedicurus?

Question: Can You Bola a Doedicurus?

Answer: The Chain bola or Large Bear Trap works on the Doedicurus, but the regular bola does not. The Doedicurs may be small, but it’s also quite heavy, making them difficult to restrain.

Question: Does a Doedicurus Need a Saddle?

Answer: If you want to ride the Doedicurus, you need to make a saddle. The saddle unlocks at level 34, and it’s relatively easy to make. But you don’t need a saddle for the Doedicurus to wander and gather stone.

If the Doedicurus wasn’t so good at gathering stone, then the drive to keep it around would all but dissipate for most players. But it’s the best stone gatherer in the game at no contest. So if you plan on using stone – which most players do – then you should grab a Doedicurus.

I once made a huge Mayan/Aztec temple using the thousands and thousands of stone that I got with a Doedicuurs. It would not have been plausible if I hadn’t used the Doedicurus, and like most ARK players, I owe this Stone Lord a lot.