A Deinonychus ARK guide is what I needed the first time I played on Valguero. When I first saw a Deinonychus, I lost my entire inventory because I was taken down and couldn’t retrieve my possessions.

While the Deinoynchus is a fast and tricky creature, that also means it is beneficial to own. When I started playing ARK, I was afraid of everything. But when you learn everything there is to know about each creature, that fear dissipates for the most part. Knowledge does replace fear.

What is a Deinonychus in ARK?

A Deinonychus is a small creature that was added with a Valgeuro update. It is fast, dextrous, and one of the best creatures of its size. I always describe it as a Digivolved raptor. In real life, the Deinonychus lived during the Cretaceous Period and could grow up to 10 feet long. They seem slightly smaller in ARK: Survival Evolved.

What to Know Before Your First Deinonychus Encounter

Deinonychus are aggressive creatures that will attack anyone who wanders into their territory. The second you get too close to their nesting area, they will attack you if you are on a small creature or on foot. However, they won’t attack a large creature unless that creature or one of its tribemates attacks a Deinonychus first.

The problem with Deinonychus in the wild is that they aren’t always easy to see. One could sneak up on you and take you down before you have a chance to react. That’s why it’s essential to know where their territory is located.

Where to Find Deinonychus in ARK: Survival Evolved Maps 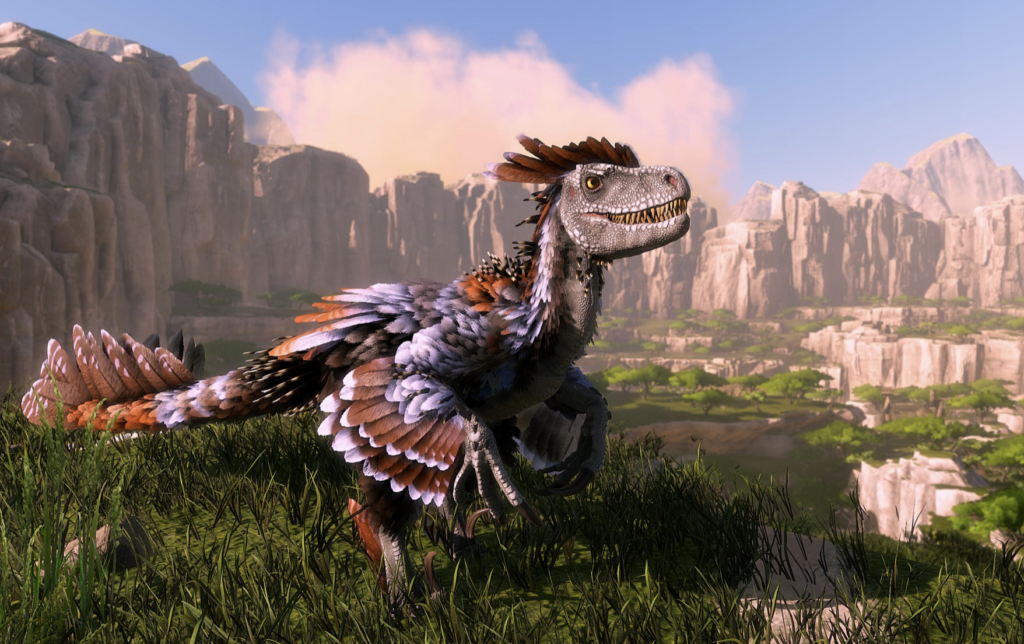 Deinonychus only spawn naturally in two different maps. They do not spawn anywhere else unless you have a mod that makes them spawn. So until then, you have to visit these maps to find them.

The only place you can find Deinonychus on Valgeuro is in the White Cliffs area. You can find them wandering around their nests in the valleys that these cliffs create. The area is gorgeous, so you may find yourself lingering.

Though I haven’t found Deinonychus on Genesis: Part 2, they should spawn in the northwest quadrant of the map. It prefers to hang out near cliffs that it can use to its advantage.

You may want to farm Deinonychus for meat or if you want to clear a nesting area before you steal an egg. Either way, there’s a good chance that one day, you will fight a Deinonychus.

The easiest way to ensure you won’t suffer any consequences from fighting a Deinonychus is to shoot it from far away. You can knock it out – which is easy due to the low torpor of the creature – or take it down. I prefer using a mount I can shoot from and either kite it or choose a flyer.

With An Argie or Griffin

This can work either with a mounted attack or a creature attack. The Argie can use a standard attack as long as you have a place to gain stamina. The Griffin can dive attack a couple of times for an easy victory.

Large Dino – and a Friend 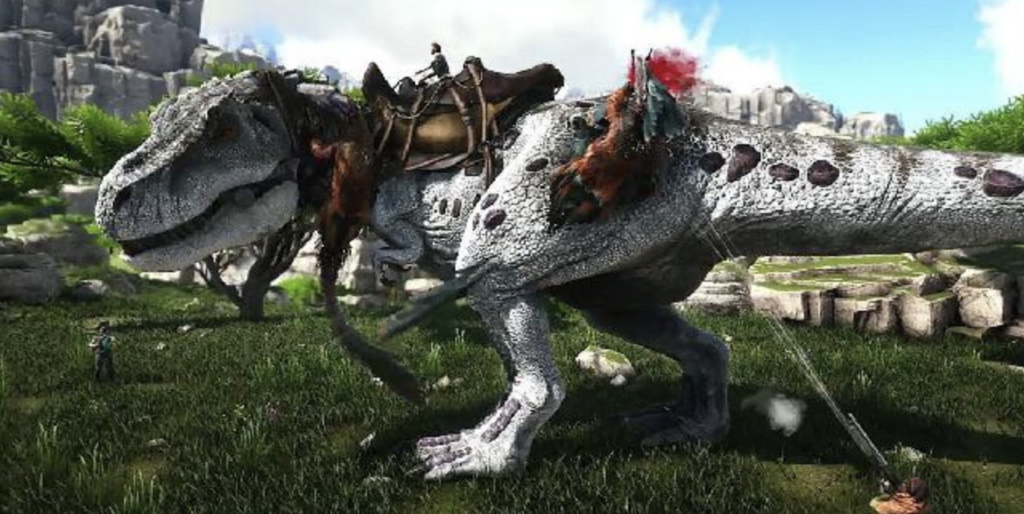 How to Tame a Deinonychus – Plot Twist, You Can’t

Like Rock Drakes and Wyverns, Deinonychus cannot be tamed. Instead, you have to steal their eggs if you want one of your own. This isn’t as stressful as it seems as long as you come prepared.

There are a few ways to steal Deinonychus eggs, and they all work out well. While you can use any method that you choose, these are the methods that I have found to be the most successful.

Unlike other creatures that are raise-only tames, the Deinonychus can be bred after they are raised. Breeding them is just like breeding anything else. Put a male and female together and turn mating on.

You can have an egg hatched and raised in about two days. This is perfect because that’s about how long the breeding interval is – allowing you to always have a baby growing up or an egg being hatched. 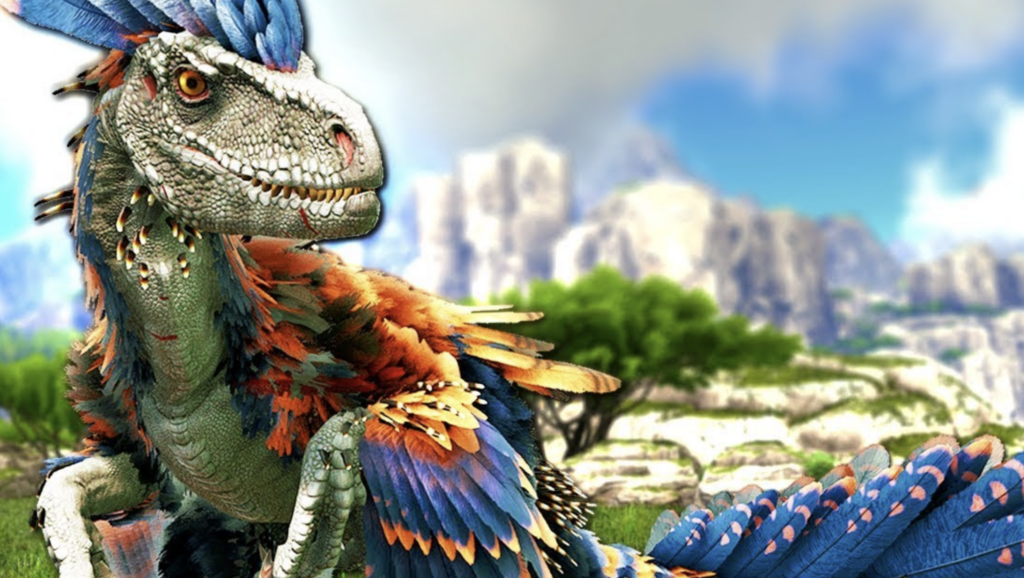 The Deinonychus is more powerful when it is with other Deinonychus from its pack. It can use its screech attack – when it is the highest level in the pack – to give a buff to the others. This buff gives a boost to speed and damage.

This jump is insane. You can use it by charging the jump attack and letting go. It can then stay in the air for longer and sort of glide across the terrain. This is perfect for large gaps; however, even if you miss the jump, it’s okay because the Deinonychus doesn’t take fall damage.

The Deinonychus can climb similar to the Thylacoleo; however, the Deinonychus climbs by jumping rather than by moving. It feels like using climbing picks – only much more fun.

Like the raptor, the Deinonychus can pin small targets down and latch only large targets. A tamed Deinonychus can also let go of the targets at any time, so you won’t get stuck on one.

The Deinonychus is a fun dino to keep around. Once I tame one, they are usually my go-to land mount, especially when I have friends online who also have Deinonychus. Did someone say pack bonus? 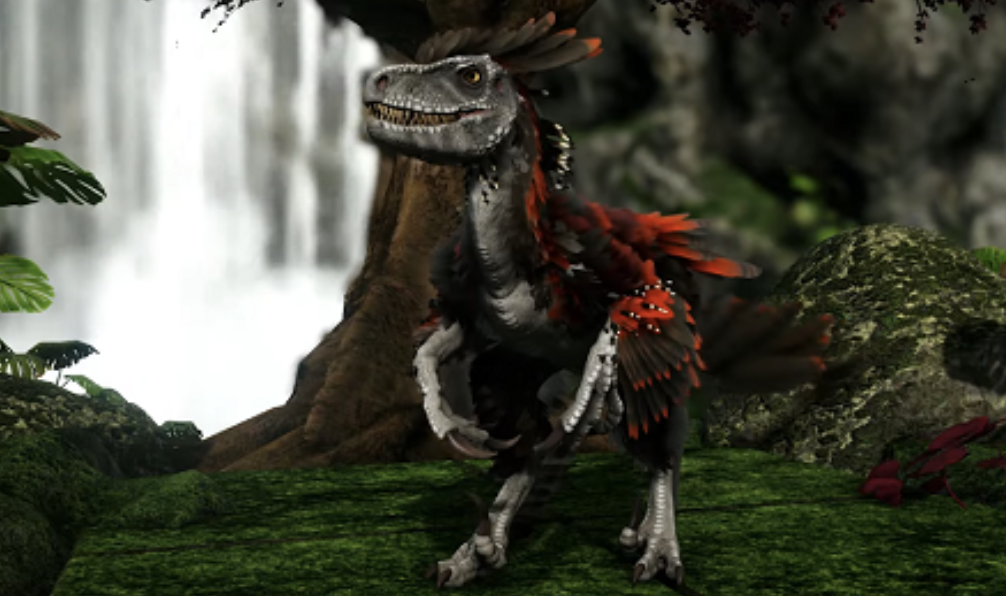 The Deinonychus is amazing at traversing the map because they are fast and they can climb. So there’s nowhere they can’t go aside from the aberration area. Everywhere else is free game.

I love that Deinonychus is on Valguero because the map is so diverse and has so many ruins. This makes traversing the terrain with them even more fun. It also makes exploring the map a lot easier.

Because it is good at traversing difficult terrain, the Deinonychus is perfect for a getaway land mount. While a flyer will always be better at getting away, the Deinonychus can scurry off after you steal eggs or pick a fight you shouldn’t have picked.

While their movement on flat land isn’t any different than other creatures, they are quite fast, and they can get away from anything that can’t climb or fly. Just hop onto a wall, and you have escaped.

Because you can’t take flyers into caves, the Deinonychus is by far my favorite mount for caves. They don’t take fall damage, they can climb cave walls, and they are strong enough to take on most cave enemies.

I love jumping off cave cliffs and climbing back up them with the Deinonychus. It’s so easy and feels so natural. While there are other climbers in the game, there are none that are better at cave climbing. 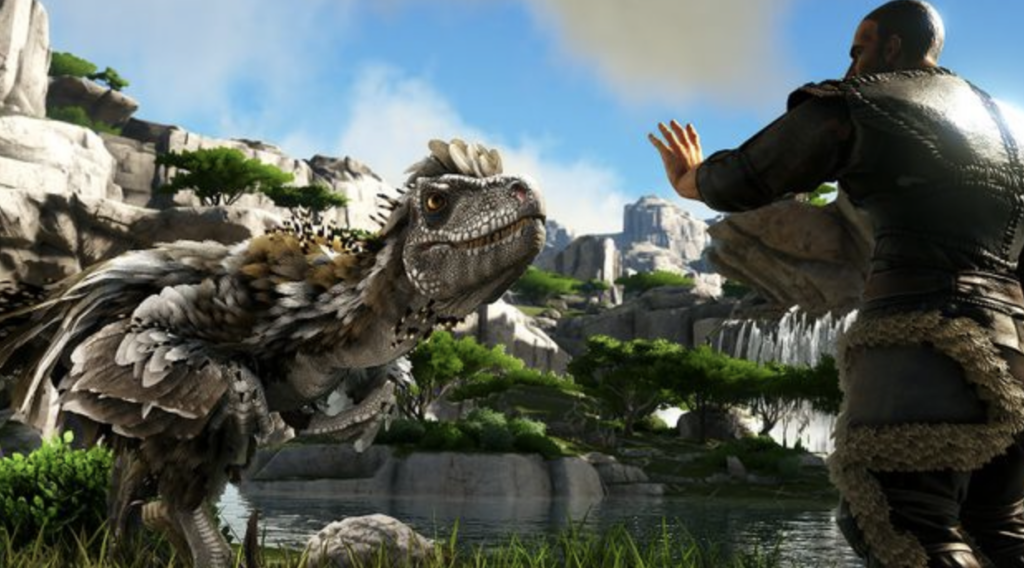 The bleed effect for the Deinonychus is unique and is called Bleeding. It drains 0.3% of health over 7 seconds and can be stacked with itself up to 5 times for a total of 1.5%. The damage scales with melee.

While you can only gain the pack effect with up to four companions, you can bring eight Deinonychus in for two pack effects. This is an amazing way to shred dinos. Just make sure you have a tank to take all of the damage, as the Deinonychus is a bit squishy.

The fact that Deinonychus are strong, versatile, and easy to control makes them perfect for PvP play. You can get away from other players or take them on. Since they can latch on and pin, you can be prepared for whatever other players throw at you.

I have a hard time attacking other players first in PvP; I only counterattack. When I see an enemy player, I just wave and wait for them to either make the first move or carry on. So when I have a Deinonychus, I feel a bit safer as they have multiple options for counterattacking.

Question: Do Deinonychus Spawn on Any Other Map?

Answer: The Deinonychus spawn naturally on Valgeuro and Genesis: Part 2. They don’t spawn on any other map. However, mods such as Simple Spawners can let moderators spawn the Deinonychus on any map.

Question: What Does the Deinoynchus Eat?

Answer: The Deinonychus eats meat. While they aren’t picky, they do eat a lot, so you will have to ensure that you keep your tamed Deinonychus fed with plenty of extra and don’t let it go to waste.

Question: Are Deinonychus in the Jurassic Park Movies?

Answer: The raptors in the movies are more similar to the Deinonychus than Velociprators. An actual Deinonychus appearance was also planned for Jurassic World: Dominion, but it was replaced with the Atrociraptor.

Question: What Is Another Name for Deinonychus?

Answer: I have seen the Deinonychus be called Cliff Chicken, Fluffy Raptor, and Deino. However, when called Deino, it’s easy to confuse them for the Deinosuchus – a modded creature – or the word “dino.”

The Power of The Deinonychus

The Deinonychus is one of my favorite small creatures in the game. It can take on almost any other creature in its weight class alone or any creature at all with a large enough pack. But what’s even better – it can run away from anything due to its maneuverability.

If you haven’t used a Deinonychus yet, then I suggest hopping over to Valguero and trying them out. Spend a few days gathering eggs, hatching them, and raising the babies. Then, the real fun can begin when you have adult Deinonychus.

I strongly suggest that you breed the Deinonychus before you take them for a spin. There is a learning curve, and it would be tragic were the only Deinonychus you have to meet their end with a simple misstep. Always be prepared in ARK: Survival Evolved.