Arron Kluz
Arron is a featured team writer and lifelong gamer. Ever since he started playing games on his old SNES, and has been hooked ever since. He has a particular love for games like Pillars of Eternity, Skyrim, a variety of beloved indie titles, and also a few online shooters to serve as a means of avoiding open-world fatigue. Outside of gaming, he enjoys watching arthouse movies, playing Dungeons & Dragons, and writing fiction.

The Don’t Starve series is home to some of the most punishing survival titles. With its lack of direction, complicated systems, and numerous ways to die, even bringing a friend along in Don’t Starve Together isn’t a guaranteed way to find success.

To thrive in Don’t Starve, players must learn and memorize the layers of information for its mechanics, enemies, and characters. Knowing one’s character is particularly critical, as not correctly knowing what role to play in a group or how to avoid their weaknesses can easily spell disaster. So, if you are interested in playing the unique Wormwood, you are going to love our Wormwood don’t starve guide. 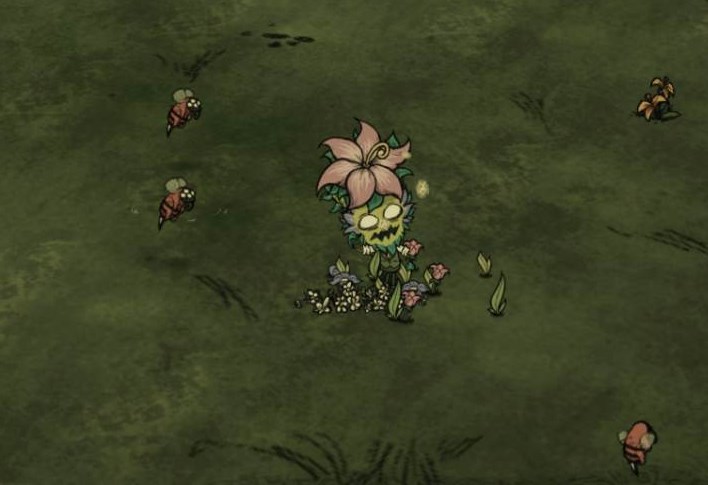 Wormwood was released alongside the Hamlet DLC for Don’t Starve and Don’t Starve Together. Around the same time, his origins were detailed through the game’s Lunar Roots animated short. The video revealed that Wormwood was created by a green gem that fell from the moon and landed on stone ruins in the middle of a rainforest.

Over time nearby vines wound their way around the gem and fused with it until they were woven into a humanoid shape with the gem nestled in its chest. Wormwood was then born and quickly became fascinated by the surrounding plant life, especially the butterflies and birds.

He tried to fit in with them by mimicking nearby parrots and pogs, but ultimately only scared them away whenever he got too close. The short then ends with Wormwood curling into a ball below the overgrown ruins where he was born, where he wraps himself with a vine and smiles as he falls asleep.

The animated short shows that Wormwood has an innate connection to nature and plant life. He is a generally positive character that loves talking to the plants and animals around him, calling them friends and cute nicknames. However, over time he has also become aware of his alien nature in the world and feels lonesome from the lack of others like him. 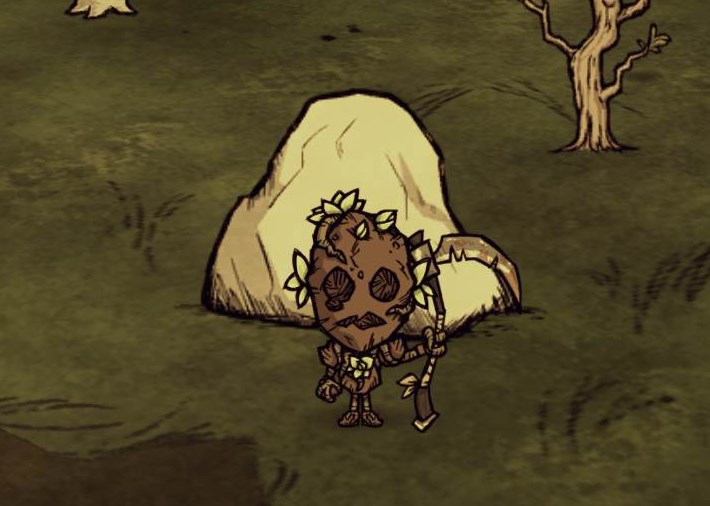 When playing alone in Don’t Starve, Wormwood’s main perk comes in the form of the Green Thumb Tab. The Green Thumb Tab gives him access to exclusive crafting recipes that help round out some of his weaknesses and add to his survivability. The contents of this unique tab are below.

Wormwood also receives numerous benefits and negatives from his close relationship with plant life. Firstly, he can plant both Seeds and Crop Seeds without having to craft a Farm first, and both grow within four days when he plants them.

Planting also gives Wormwood 10 Sanity while digging through a dung pile without a shovel gives him 30 Sanity. He also can heal using Manure, Guano, or Bucket-o-poop to regain two health per use. However, he does not recover from eating food, so eating only fills his Hunger.

If you want to play Wormwood, you should also know that plant-based enemies ignore him. These include Snaptooth Seedlings, Snaptooth Flytraps, Hanging Vines, and Eyeplants, although Snaptooth enemies will still attack him if he gets too close while holding meat. Wormwood also has the unique mechanic of blooming throughout the seasons, increasing his movement speed and eventually covering him in flowers.

This effect also makes his Hunger drain faster, up to twice as fast, while in Spring or Monsoon, grasses and flowers will appear behind him that will attract bees who will attack anybody who gets too close to them. However, Wormwood is also immune to Hay Fever, which can be a hazardous disease for most characters during the Lush Season.

Wormwood’s biggest negative comes from losing Sanity when plants near him are destroyed. For plants like burned trees, flowers, seeds, saplings, and grass tufts, he loses two Sanity. He also loses two Sanity if he witnesses a tree, sapling, or grass tuft being knocked over or uprooted by enemies.

Picking up flowers or digging up tree stumps, coffee plants, bamboo patches, saplings, grass tufts, viney bushes, or nettle vines cost him five Sanity. Finally, he loses a whopping 15 Sanity every time he has to chop down a tree, even if they’re burned.

Wormwood is also more prone to being lit on fire than other characters and can even be subject to the Smoldering debuff in Summer. The Ice Flingomatic can also freeze him if two attacks hit him, so you’ll have to be careful around them. Finally, Wormwood also has a slightly worse spawn than other characters.

He spawns next to three Rocks and four Ancient Walls to tie into his origin story rather than the Hot Air Balloon that most characters spawn by. This prevents Wormwood from getting the valuable resources from the Hot Air Balloon at the start of the game, so you’ll have to find your starting resources elsewhere.

Wormwood in Don’t Starve Together 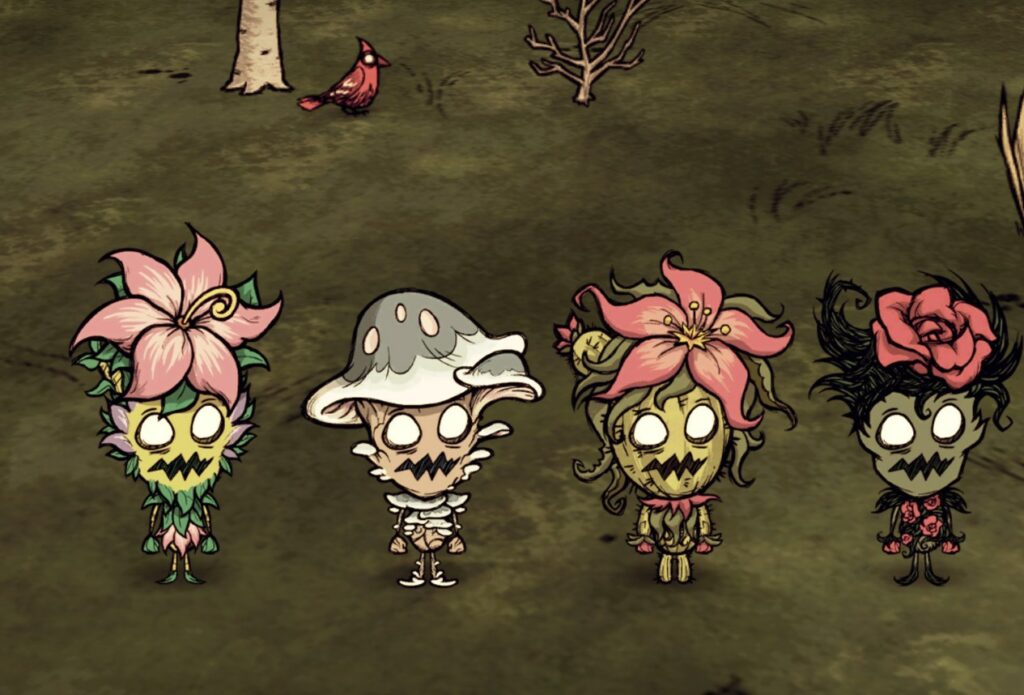 While Wormwood is mostly the same in Don’t Starve Together as in the single-player game, there are some crucial distinctions. Firstly, his Green Thumb Tab is smaller and only includes the recipes below.

Wormwood’s ability to plant seeds anywhere is also slightly modified. Rather than not needing a Farm to plant Seeds and Crop Seeds, he doesn’t require a Garden Digamajig or Garden Hoe. He can plant the seeds on most terrains, only excluding ones without dirt, such as Rocky Turf.

The plants that he plants grow at the same speed as those planted by anyone, but they stay fresher while in the ground for 1.5x as long. Wormwood also still gets 10 Sanity from planting, whether Seeds and Crop Seeds in the ground, Farm Plant, Mushroom Planter, or Tree seeds.

In Don’t Starve Together, Wormwood can also heal himself with any fertilizer. The rate that the fertilizer heals him is dependent on its Compost nutrient value and triggers his blooming, and makes his fully bloomed state last longer. His bloom is also modified, with it having three stages that increase his hunger drain and speed at identical intervals up to a flat 20% increase.

While he is fully bloomed, Wormwood also benefits from automatically tending to any crops within one tile of him. His bloom also still creates grass tufts and flowers in a trail behind him that will attract Bees, Grumble Bees, and Bee Queens. They will be neutral to Wormwood as long as he is blooming, but they are highly aggressive toward other players. Being fully bloomed also grants Wormwood 60 Overheat protection.

For enemies, Wormwood is also not attacked by Eyeplants or Sea Weeds while he is immune to the effects of both Spiny Bindweed and Fire Nettles. He also does not experience any Sanity drain when he is wet or equips wet clothing.

However, his negative aspects are also present. Wormwood still doesn’t receive any healing from food items and loses Sanity from setting plants damaged around him. He loses two Sanity from seeing trees, flowers, seeds, saplings, or grass getting burned and getting uprooted by enemies.

He’ll lose five Sanity when he picks Flowers or has to dig up a tree stump, grass tuft, or saplings, and he loses fifteen Sanity whenever he chops down a tree. Wormwood also takes an additional 25% damage from fire and will burn for one second longer than other characters for 4.4 seconds. 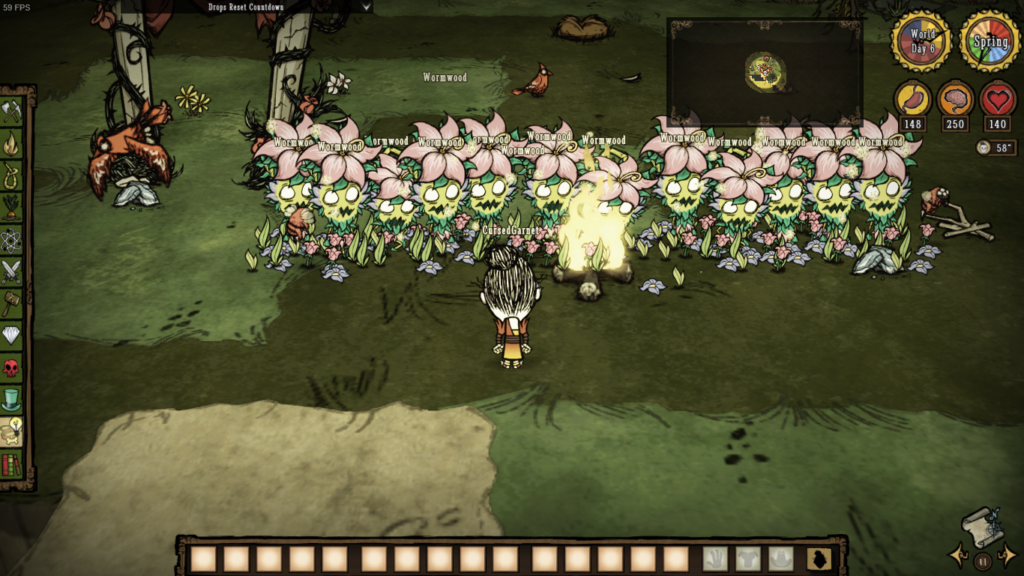 If you’re looking to play Wormwood, there are some important tips and strategies that you should keep in mind. One of the biggest you should know is that Wormwood’s favorite food is Cooked Banana in Don’t Starve Together. This food is relatively cheap, and his favoritism toward it sees him get a 15 Hunger bonus when he eats it, making it by far the most economical food for Wormwood players. Wormwood is also a great character to manage a group’s food supply since he can grow the crops so much better than others. This also makes Tents and Siesta Lean-tos excellent options for healing and restoring Sanity as you’ll have enough food to keep your Hunger up while resting.

Wormwood is also a great compliment to playing with Warly. His seeds will help Warly access powerful items and dishes that help compensate for Wormwood’s inability to heal by eating while also cutting down on some of Warly’s costs. He also is complimented nicely by Wortox, as their souls can be used for a cheap healing resource.

With how easy it is for Wormwood to regain or lose Sanity, he is also a great character to equip items like the Dark Sword and Night Armor while also being the best character to use if somebody needs to be insane. However, you’ll need to coordinate with other players to ensure you aren’t having your Sanity plummet by watching them chop down trees for crafting.

“Glow, friends! Hi!” -Turning on a Mushlight in Don’t Starve Together.

“Getting unwet.” -Using a Drying Rack.

“Need Shaggy Buddy.” -Trying to groom a beefalo when one isn’t around.

Question: How do you get Wormwood?

Answer: Wormwood is a free character in Don’t Starve for any players who own the Hamlet expansion. Otherwise, he can be purchased with the Wormwood chest or collect 2,700 Spools.

Question: Can Wormwood grow giant crops in Don’t Starve Together?

Answer: Yes, Wormwood can grow giant crops just like any other character, and they still benefit from the increased freshness duration while still in the ground. However, he does not receive further Sanity bonuses or effects from growing big crops.

Question: Is Wormwood a good starter character in Don’t Starve?

Answer: Wormwood has a unique and fun playstyle. He can be a good beginner character in Don’t Starve Together because his Sanity is easier to manage than other characters. However, in Don’t Starve, he can be a bit trickier to play since you can’t avoid the Sanity hits from chopping down trees and gathering other plant-based resources, making getting started with him a bit difficult.

He is also an excellent character for any player who wants a character that can focus on one role, such as producing food for the group, rather than balancing multiple mechanics or responsibilities.

One of Don’t Starve‘s greatest strengths is its roster of characters. They each bring a different perspective and personality to the gameplay experience, but they also modify how players have to approach surviving the series’ harsh environments. Wormwood is no different.

His optimistic and bright personality is great for players who want to have fun and smile more during their runs. At the same time, his focus on food management and intricate Sanity mechanics present new challenges while making him an indispensable member of groups in Don’t Starve Together.