A Valheim boats guide is just what I needed whenever I was assigned the task of getting my crew off the first island. There is no other way to travel across the waters in Valheim, so this was a big job when I first started playing.

However, I quickly understood how sailing worked and when I needed to build each boat. Learning how to sail in Valheim proved invaluable when I started playing Atlas, and I believe it will whenever I check out the new Sea of Thieves patches.

Although, when I played Atlas, I was assigned “entertainer,” so I played “My Heart Will Go On” on the accordion as another crew member sailed the open seas. I much prefer the bard role to the captain, but at least in Valheim, I know I’m not missing out.

Valheim Boats – At a Glance

The Importance of Valheim Boats

Valheim boats are necessary if you want to leave the island you start on. The initial stamina and breath control of your character are pitiful. But even if you max it out before leaving the first island, the devs ensure you won’t get far swimming.

In this Viking world, you have to build boats to progress in the game. I love this aspect because oftentimes in games, there is so much filler content that you don’t even explore until after you finish the main objectives.

How to Sail in Valheim

Sailing in Valheim is simple, but there is a small learning curve. I find it easiest to learn something by breaking it down into steps, so that’s what I did.

To begin sailing, interact with the rudder. Make sure everyone is on board before doing so. I’ve left behind crewmates before, and it’s a pain to sail against the wind to go get them.

Now, look at the mini-map on your screen and note the direction of the wind. This is ever-changing, so you’ll have to keep an eye on it at all times. There is a wind symbol that lets you know the direction the wind is coming from. Ideally, the wind will be behind you, but as long as it’s not in front of you, then you will still move.

Pressing W and S will change the sail, which will, in turn, change the speed. There are five settings – reverse, stop, forward, half sail, and full sail. A helm emblem will appear on the screen with arrows pointing either up or down. This is so you can keep track of what setting you are on.

4. Stop before Hitting Anything

If you hit land, the turtles, or a rock, your boat will take damage. If it takes enough damage without being repaired, then it will crash, and your team will be thrown into the ocean. The storage items will be placed into a box, and if you drown, you can go back to get your stuff. But it’s all an inconvenience, especially if you’ve sailed far.

There are three boats in Valheim. They work as a stairstep for progressing, but you may find that even in the late game, the smaller boat is preferable. This is what you need to know about each of them.

You can make a raft right from the start. You don’t even need any tools, though making a stone axe is quite beneficial. Though it is quite slow, this raft will get you far in the game.

To make the Karve, you need to do a few things first (unless you want to spend way too much time searching shipwrecks and trolls.) First, you need to defeat the first boss – Eikthyr. Then you need to craft an antler pickaxe so you can mine copper and tin to make bronze.

You won’t be able to build a longship for quite some time. Before you can make iron nails, you need to gather iron. Using the key dropped from defeating The Elder, you can find iron in sunken crypts. Or, you can use the Wishbone dropped from Bonemass, though this is a slow method.

Uses for Boats in Valheum

Each boat has a different purpose, as it’s not just about building the biggest boat – especially in PvP. Though Valheim is not meant for PvP to be the focus as it is in other multiplayer survival games, it’s important to consider it if you are playing with friendly fire.

Fishing from a Boat

Fishing became more intense with the Mistlands update, but I still think that a Longboat makes for a nice fishing trip. It’s easy to control and can hold as much fish and bait as you want it to.

Sneaking with a Boat

Even if you’re not playing PvP, you can use a boat to go around the Plains and avoid an early attack from Goblins and mosquitoes. The raft is a great boat early game for sailing around the island to see how big it is without putting yourself in danger.

Gathering in a Boat

You can use a boat to sail to another island and gather metals not found at your base. I can’t count the number of times someone has been sent to gather a boatload of metal and be expected to make it back to the home base.

The boats in Valheim don’t have turrets or other weapons, and you can’t build on them. But you can leave the rudder to attack with a bow or have other crewmates attack while you drive. This is a good option for sea serpent hunting.

Boats in Valheim are self-explanatory after the initial learning curve. But there are a few things that the game doesn’t explain, all things that I had to learn the hard way. At least they made for good memories.

Each boat has a set max HP. Whenever that HP reaches zero, the boat will be destroyed. Hitting things or being hit by other players will damage the boat. So keep this in mind as you sail the seas.

Each boat deals damage whenever it rams into a living creature. The Raft deals 20, the Karve 30, and the Longship 50. To put this into perspective, you begin with 20 health. So if you don’t eat, the Karve and the Longship will both kill you in one hit.

Boats cannot be deconstructed in Valheim. But you can get all of your materials back if you destroy them with a weapon. So get to chopping and remember to pick up the materials and storage items.

A good way to keep your boat safe without destroying it is to build a structure under it. There aren’t many creatures that will attack a boat that doesn’t have any players in it, but you can never be too safe.

Getting Off the Boat

If one person is left on the boat, it will still move. So always make sure everyone jumps off whenever you’re ready to stop, and never log off while on the boat, or you’ll wake up in the middle of the ocean.

If you defeat Moder, you can gain the ability to have a tailwind while sailing. It only lasts five minutes and has a 20-minute cooldown, but that five minutes can mean everything.

Boats are vulnerable to Fire but resistant to Frost and Piercing damage. But they are immune to Chop, Pickaxe, Poison, and Spirit damage. Everything else is neutral.

The Natural Progression of Boats in Valheim

To make things simple, this is what the natural progression of boating looks like in Valheim. This is in order of availability rather than the order that I normally take. So feel free to skip any that you can.

Gather Materials and Build a Raft

Building a raft is easy. The easiest way is to gather wood from the ground (or build stone axe and chop trees) and then farm boar and dwarves. Then you can build a raft from your crafting log.

Before you get the next boat, you need to defeat Eikthyr. So, find his summoning stone and then defeat him. He will drop the antler you need to build an antler pickaxe. This will get you far in the game though you can upgrade to a bronze one soon.

Bronze is made with tin and copper. Tin is found in small deposits along the shore in the Black forest. Copper is found in large deposits in the Black Forest. After you gather both, smelt them together in a Smelter (easy to build.) Then, build a Forge and make bronze nails.

Craft a Bronze Axe and Build the Karve

Defeat Bonemass or The Elder

The Elder is the second boss, and Bonemass is the third, so at this point, you can defeat both.

Once you have the swamp key, build a bronze pickaxe and then go to the sunken crypts, where you can gather more iron than you can carry. Bring a cart. Then take the iron back to base and make iron nails in the forge.

Finally, once you have bronze tools (and iron), you can take your materials and build the longship. This is as good as it gets in the game right now, but know that your efforts will soon pay off with your new ship’s new speed and carry capacity. 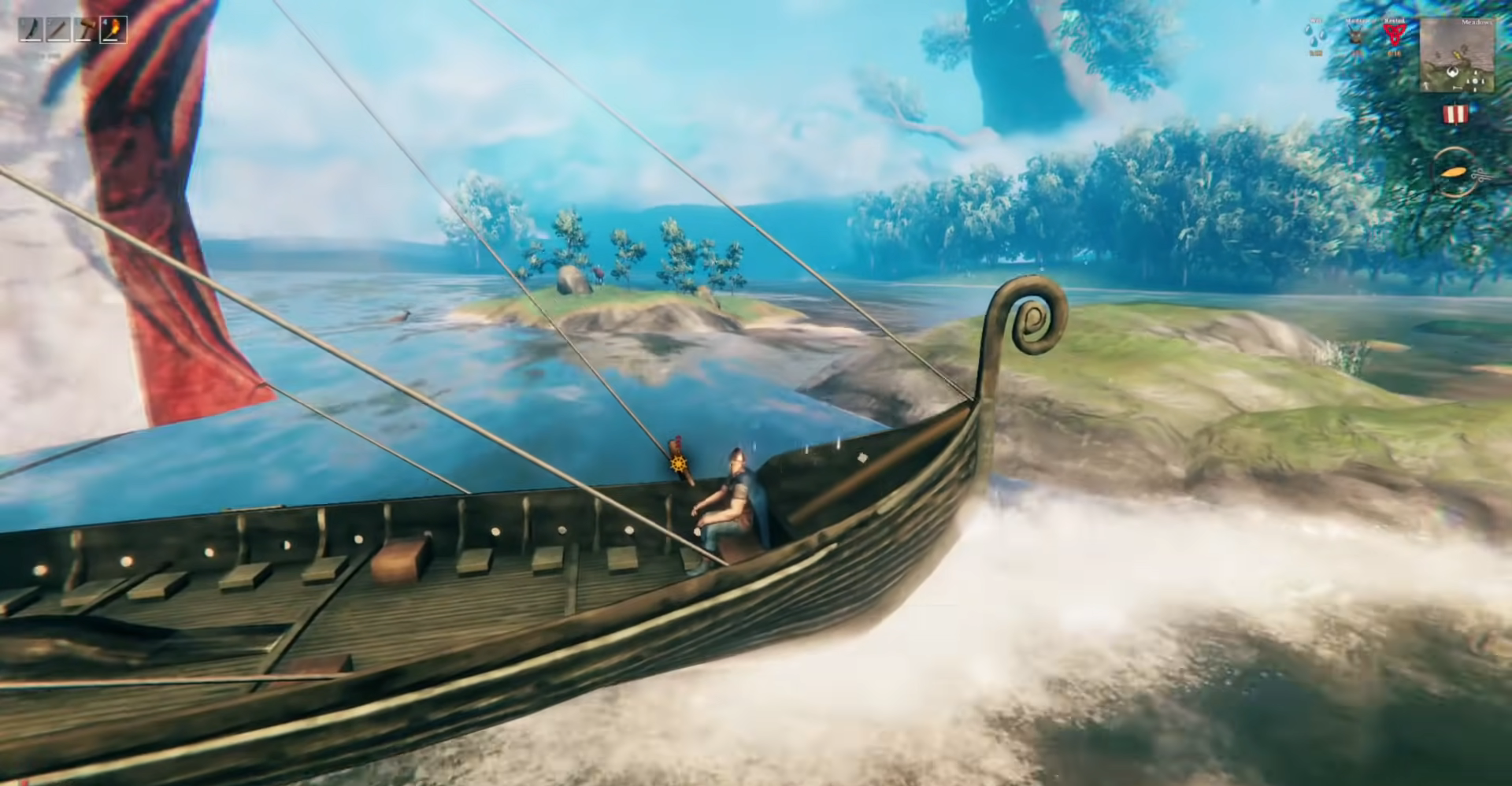 Question: What is the Best Boat in Valheim?

Answer: The best boat in Valheim is the Longship. The only downfall to it is that it is hard to maneuver. But if you can get your hands on one, you’ll find that the pros far outweigh the cons.

Question: Can Boats Capsize in Valheim?

Answer: Yes. The boat can flip over and sink if the waves are high or you hit a rock. So pay attention to the winds and make sure you don’t hit anything to keep your boat and your crew safe.

Answer: Sadly, no. The Mistlands update did not add any boats. Hopefully, in the future, there will be a small speedboat or a supership that’s larger that the longship and has turrets/canons.

Valheim boats are a crucial part of the game. You must build them to progress through the game. While you can skip the raft if you get lucky on the first island, the rest will be necessary for you to make the most out of your Valheim experience. So sail on, Viking.